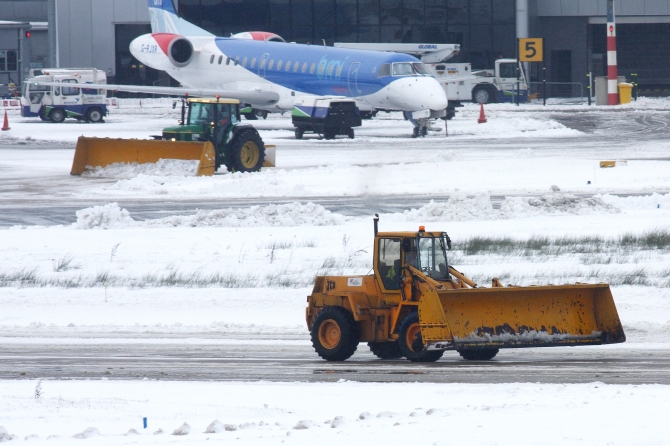 Whilst seemingly a rare event in recent years, snow is one of the few weather events that can effectively close an airport.

Why is that and how does the Met Office help airports to plan for snow events?

Whilst some parts of the UK see snow more regularly, for many of us it is a relatively rare event and the winter of 2010 was probably the last winter that many of us recall as having a large amount of snow. In that winter, airports were affected with reported closures and passenger journeys severely disrupted.

So why can these events cause such disruption? The simple answer is safety: as we know from walking or driving on snow and ice, it is slippy. The same is true for aircraft landing and taking off at airports. If a runway is contaminated with snow or ice, the braking action of an aircraft on landing can be significantly reduced, i.e. it takes longer for an aircraft to stop. This can mean that the aircraft can take longer to stop than the available runway length. Hence to land, the crew will want to be completely sure it is safe to do so and that they can stop the aircraft in time.

In addition to the runways, airports are made up of lots of other surfaces that aircraft and other vehicles need to operate on, such as taxiways and stands. Again there is a risk that if these surfaces are contaminated with ice or snow, an aircraft or vehicle can slip off somewhere un-intended or, in the case of an aircraft stand, if there is too much snow, the aircraft simply won’t be able to move.

For an airport to run safely effectively, it needs to try and keep all of these surfaces free of snow and ice.

A further complication is if there is any snow and ice on an aircraft prior to take-off. If snow and ice is on an aircraft, particularly the wings and other flight control surfaces, this can affect the aerodynamics of the aircraft and therefore the lift. This has had disastrous consequences in the past with several fatal crashes attributed to this aircraft icing.

In a snow event, all aircraft will therefore need to be ‘de-iced’ (sprayed with a chemical de-icer or forced air) to remove any snow and ice contaminant.

Therefore to cope with snow, an airport and the airlines will need to have the logistics in place, such as snow clearing vehicles, chemicals and staff. Of course for a large airport, this infrastructure and associated planning can be huge and most airports will have well documented and rehearsed ‘snow plans’.

Most snow plans will rely on an accurate forecast on which to base snow readiness and decision making. Many airports in the UK use the Met Office’s OpenRunway® product and conversations with our forecast team to get an accurate understanding of the weather. For some (particularly Heathrow and Gatwick), we have dedicated on-site teams of forecasters who are there to provide detailed and continually updated advice to help the operational managers make the best decisions in these high capacity international airports.